We had originally intended to run this article last March, but when the entire world shut down and all summer camps were canceled, the article went on the shelf.

Well here we are in September, the summer gone, the pandemic still raging, and school all online.  We find ourselves dreaming of next summer, when maybe, just maybe, summer camps will be back in session and we can finally get our kids out of the house for some duration of time so we can have a few minutes of peace and quiet and... Oh right. The article.

If you're someone who loves planning well in advance, then consider a summer camp designed specifically for your gifted child.

My ten-year-old—Alice—has twice now attended Davidson Institute’s Summer STARS in Reno and had a blast both times. Below is summary of what it is, and how it went her first time (which was pre-pandemic):

STARS is an acronym for “Successful, Talented, Ambitious, Remarkable Scholars”. Per Davidson Institute’s website (http://www.davidsongifted.org/young-scholars/program-benefits/summer-events),  it is a residential summer program available to students, ages 8 to 11, who are enrolled in the Davidson Young Scholars program. Participants attend academic sessions and engage in various social activities throughout the program. Below are the highlights from Alice’s experience.

The camp was four days and three nights. Check-in was at the University of Nevada dorms (across the street from the Davidson Academy) on a Monday afternoon. Check out was four days later.

It was a mental challenge for my spouse and me. Alice was only eight at the time, and we were leaving her in another state—for three nights—something we had never done before. Phones or electronic devices were not allowed either, so she couldn’t just call. Our only connection would be pictures of camp goings-on emailed to parents each afternoon.  When the emails arrived, we would comb through the pictures for a glimpse of Alice sitting at a desk in a classroom or running around outside (in the “quad”). She was among some of the brightest kids in the country. Would it be too difficult? Was she having fun? We would not find out until Friday. 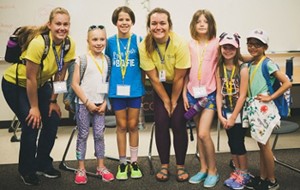 We were confident Alice would not be homesick.  She relished the idea of living in a dorm for a week—three kids to a room—no parents, surplus gummy bears from the airport and some spending cash for “emergencies”.  But again, we would not know until Friday.

On Tuesday, Wednesday and Thursday Alice attended an academic session or “survey” with her group (about fifteen kids; there were three groups). There were three different subjects. Each class was about an hour-and-a-half long. Past sessions have ranged from game-theory, physics of motion, seismology, mythology, and history. From reports I received, the academics were not terribly intense (no tests) but they delved deep into the subject using the time they had. In addition to academic sessions, Alice took field trips. One was to the University seismology lab. Another was to a local museum.

During downtime, Alice participated in activities ranging from games, running around in the quad, crafts, or hanging out with new friends.

When we met Alice on Friday, we were relieved camp was a success. She wanted to return the next summer. It turned out a safe place. She (and I imagine other kids too) could be herself and let her flag fly.

Next up for Alice would be a more intense camp called Summer REACH, where students take a course over ten days focused in one academic area. Alice was signed up to take “Introduction to Ecology: Research, Techniques and Writing in Science,” where she would learn to test water and soil quality, and biodiversity, and use those techniques to conduct research. But as other camps were cancelled, so too was this one.

Here are some other camp opportunities for gifted kids:

- Great Books Summers (focused on literature) (ages 11 and up) has a good reputation (some of the guest speakers are amazing).
- For younger kids with exceptional math talent, there is Epsilon Camp, or Awesome Math.
- For a more social-emotional focus, try YANUSA in Michigan.
- Locally, Seabury School and the Robinson Center (University of Washington) offer summer day camps geared towards gifted kids.

Though this past summer was different for almost everyone, we’re hopeful that summer of 2021 will offer some of these opportunities again.