For the first part of my lecture notes, click here.

Why do gifted kids struggle so often emotionally?  Many reasons, but one major factor is their own asynchrony.  Linda provided the following example:

A four year-old child operates cognitively at a seven year-old level. She observes a horse in a pasture and wants to draw a picture of it to capture the memory. Unfortunately, she is still physically four years old and lacks the basic motor skills of a seven year-old. Her horse comes out looking like what any other four year-old would draw—much lower than her understanding of the horse. If that isn’t enough, mom and dad coo over her disappointing, sub-expectation work, which seems to exacerbate her feels of failure.

Struggles like these become a constant for many gifted kids, keeping them perpetually stressed and thus prone to outbursts and/or breakdowns.

2.   Perfectionism in a World that Values Speed

Because gifted kids tend to be perfectionists, putting them at odds with tight schedules and "draft-quality" delivery. Perfectionism, however, is not the problem.  Per Linda:

“It’s sad that we, as a society, have demolished perfectionists. Perfectionism has been denigrated by a society that loves mediocrity.”

Another fascinating tidbit that Linda shared was that gifted learners are not fast.  They are methodical and will produce exceptional quality material, but they are often slower to do so than their age peers.

Roughly one sixth of gifted kids also have some form of learning inhibitor, whether it’s ADHD, OCD, dyslexia, or something along those lines.

Twice-exceptionalities are different from Overexcitabilities (OEs). The two should not be confused. 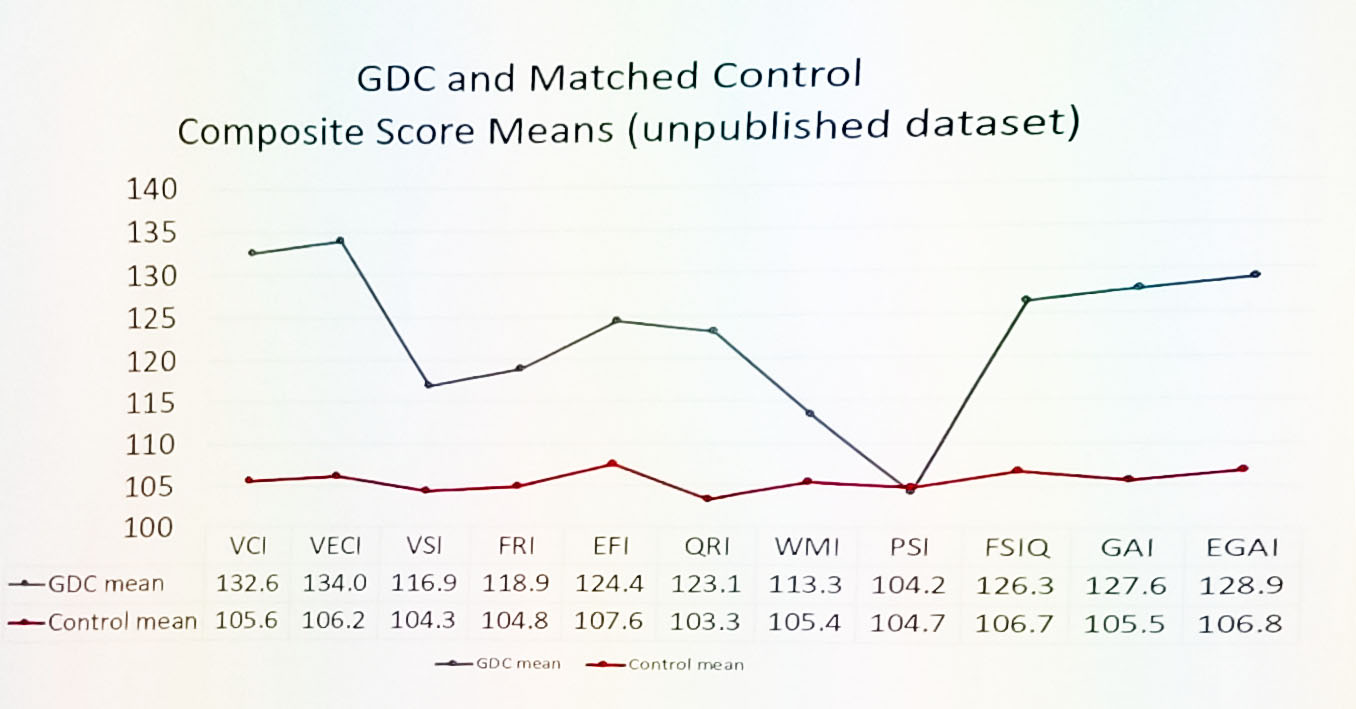 This slide (above) contains as-of-yet unpublished data from the WISC-V assessments. In their analyses, Linda's team found that gifted, highly gifted, and even profoundly gifted individuals had a cognitive area where not only were they exactly the same as typical learners, but scored even slightly below: Processing speed (PSI).

This was the core of what Linda focused on.  Her summary statement:

One of the most astonishing things she pointed out, though, was that a gifted person’s overexcitabilities are inextricable from their gifts!

“Taking away their overexcitabilities also takes away their genius or creativity.”

At this point I asked Linda if it's possible to sort out an OE from a mental health issue. Her response was that if you don't see the positive aspects of an OE and if the person's trajectory is toward incapacity or self-harm, an intervention is probably needed.

OEs and mental health are not mutually exclusive, nor are they linked.

“When children can truly believe that parents and teachers are on their side, they will be less frequently blocked in using their real abilities.”
Dr. Annemarie Roeper

Check out Linda's organization here for a ton of great resources!